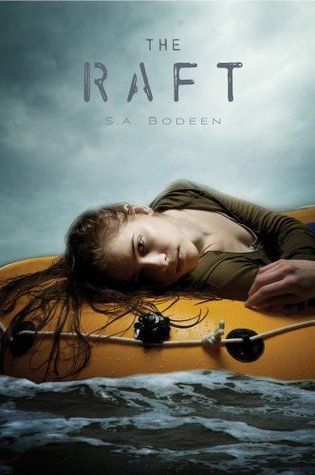 Publish Date August 21, 2012 Feiwel and Friends ARC from Around the World ARC Tours Reviewed by Michelle

Robie, 15, lives with her family on the Midway atoll, a group of islands in the middle of the Pacific. Her parents are scientists; it’s an isolated life.

Robie enjoys visiting her aunt in Hawaii – she gets back and forth on a cargo plane that brings supplies to Midway.

During a visit, her aunt is called to the mainland for a work emergency, leaving Robie to get home on her own. On her flight back to Midway the cargo plane hits nasty weather, and goes down.

It’s just Robie, the pilot, and Max, a co-pilot she’s never met till this flight, on board.

Robie is pulled aboard a raft by Max, who is injured and slipping in and out of consciousness. They have a bag of candy and very little water between them.

When they finally reach an island that seems abandoned, Robie hopes they’ll be found quickly. But she’s not sure she was even on the flight manifest.

Her parents must be looking for her… aren’t they?

In THE RAFT, S.A. Bodeen creates a hair-raising suspense storyb that will have readers agonizing over the same question as Robie — how long can they survive? -Goodreads

I don’t read a lot of contemporary but a survival story?

That I will jump on.

This book review of The Raft talk about the things I enjoyed – the suspense, the terror, the wondering – and thing I just didn’t – some things were just too “easy” the way they happened.

When the plane Robie is on starts to go down, Max (the co-pilot) throws her out, saving her life, and gets her on the raft. After that Robie and Max are left to float around in the warm waters of the Pacific without any food, water, or way to contact land.

Like Robie, the thing that would freak me out the most about being stuck on a raft in the middle of the ocean would be the sharks. I am terrified of them — barely go in the water at the beach I’m so scared of them.

So, I’m with Robie on this one and I’m not sure I would’ve been as brave as she was when she HAD to get in the water.

Robie is not someone I would want to be alone on a raft with.

She was kinda annoying — even though I should probably remember that she is fifteen years old and being whiny and annoying is required. I just didn’t connect with her at all.

I would have liked to have gotten to know Max a little more — but he was always unconscious so we don’t get much from him either.

What I Think About The Raft

When Robie and Max make it to the island is when Bodeen lost me.

There were just a few things that happened that I just didn’t believe was even possible. (This coming from a girl that loves paranormal/sci fi books.)

I can’t really say much more about The Raft.

I didn’t form a connection with the characters and I just felt like I knew how it was going to end before it got there.

There were times that I was freakin’ out with Robie — especially with the sharks and being in the water. And there is a twist at the end that made me have a “OH!” moment – didn’t really see that coming at all.