This Raft Utopia walkthrough will come in very handy indeed if you’ve finally made it to your final destination after such a long journey, but you’re not sure where to start in this impressive city. But wait a minute… Isn’t it rather quiet? Shouldn’t there be more inhabitants?

Your main goal in this Raft Utopia walkthrough is to face Olof, the bad guy. To do so, you need a Zipline Tool, Healing Salve, and your puzzle-solving skills with some pesky cogwheels. We can also help you find Detto’s code, a harpoon, the Big Backpack blueprint, a hammer, and more in this survival game. Here’s everything you need to get through Utopia in Raft, but if you’re not actually at Utopia yet in-game, you may need our Raft Temperance walkthrough, or more specifically, Raft Temperance code guide which explains exactly where you can find the coordinates for Utopia. 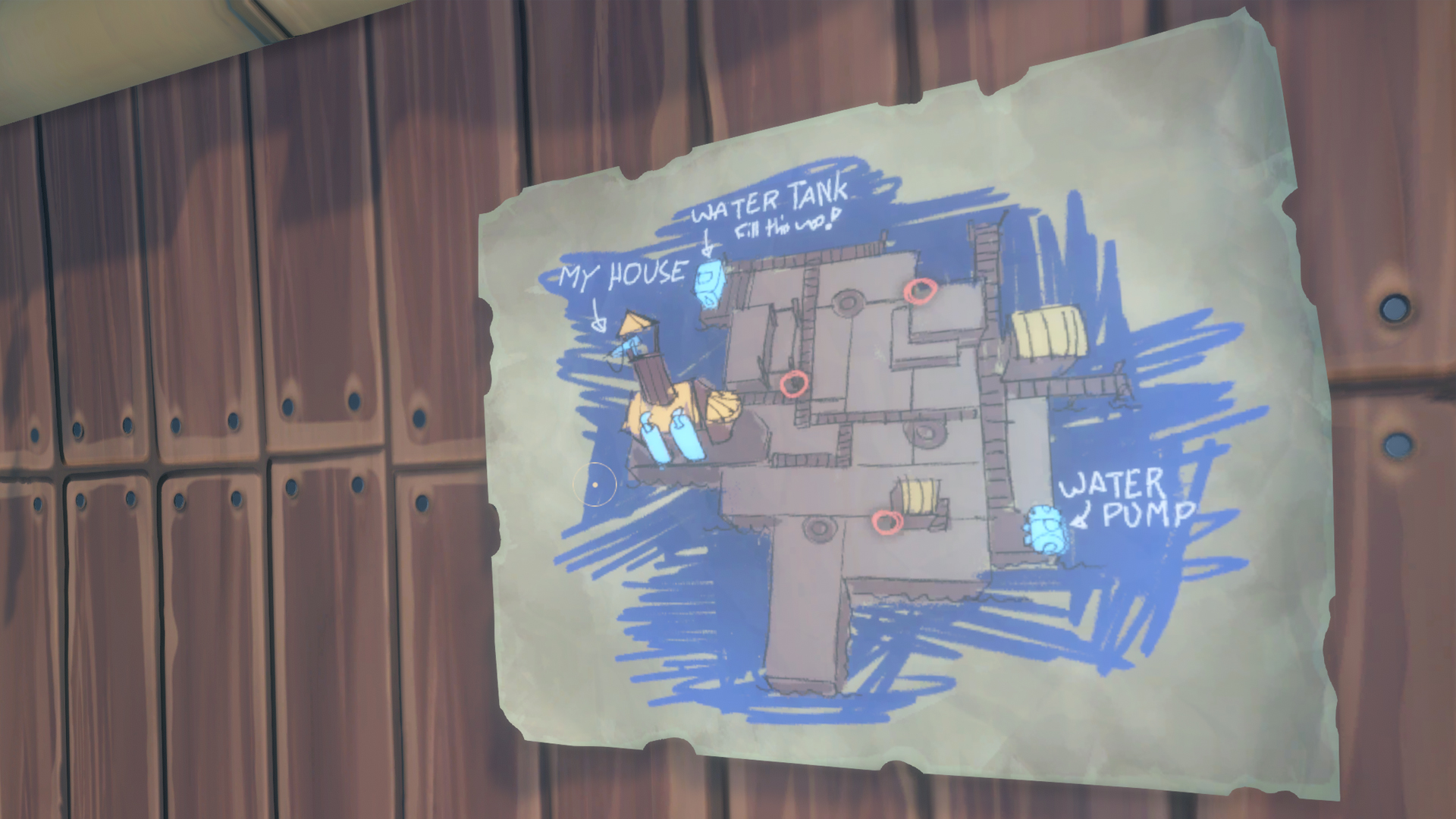 Utopia part one: Find Detto’s Code and the Harpoon

First, go to Detto’s House near the docks. It has a tower and is surrounded by farmland. The door is locked, but you’ll find a Shovel and a map outside. There are three small red circles drawn on the map; dig up the piles of dirt in these locations to find the three parts of Detto’s Code, which will then enable you to open the door to his house.

Be careful though, because if you dig in the wrong place, bugs will crawl out and deal damage. You can avoid damage by stepping backwards directly after digging. Inside Detto’s House, you will find the Big Backpack blueprint and a key item: the Harpoon. 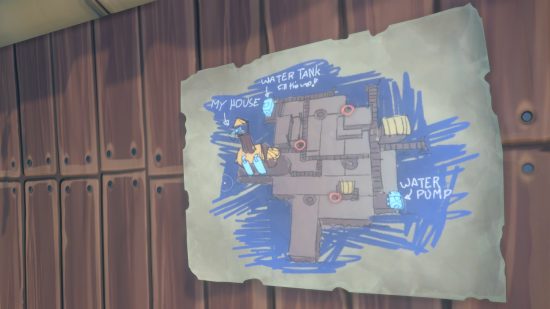 If you stand with your back to Detto’s House, you will see a bunch of huts to the right. This is where you will find the power generator. Be careful, this area is full of hyenas who will try to drag you across Utopia. Best to bring a weapon!

Your task is to connect one generator to the other using Electrical Cables – there are five in total, all lying on top of the buildings. Use the crates to reach the rooftops, and then use the Zipline tool to go from one rooftop to the other. Make sure you drag the Electrical Cable towards a building that’s reachable with crates, as you can’t use the zipline at the same time. Use the picture as a reference for the first four Electrical cable connections.

Now that the power is on, the water pump near Detto’s House is working. Next task: to turn the three wheels until the water from the pump reaches the water tank. There’s a trick that will make this simple: when turning the outer wheel, check if the tubes are connecting on both the input and output side, then work your way towards the middle.

After that, walk to the Water Tank and pick up the second key item: the Carbon Dioxide Canister. Go to the tower on Detto’s House and use the Canister and Harpoon to shoot a zipline across the water. Pick up the Entrance Key, then use the other zipline to find a locked door. This door requires a second entrance Key to open, but no worries; if you walk a bit further, you’ll find the second one lying on the stairs in front of the big hut. 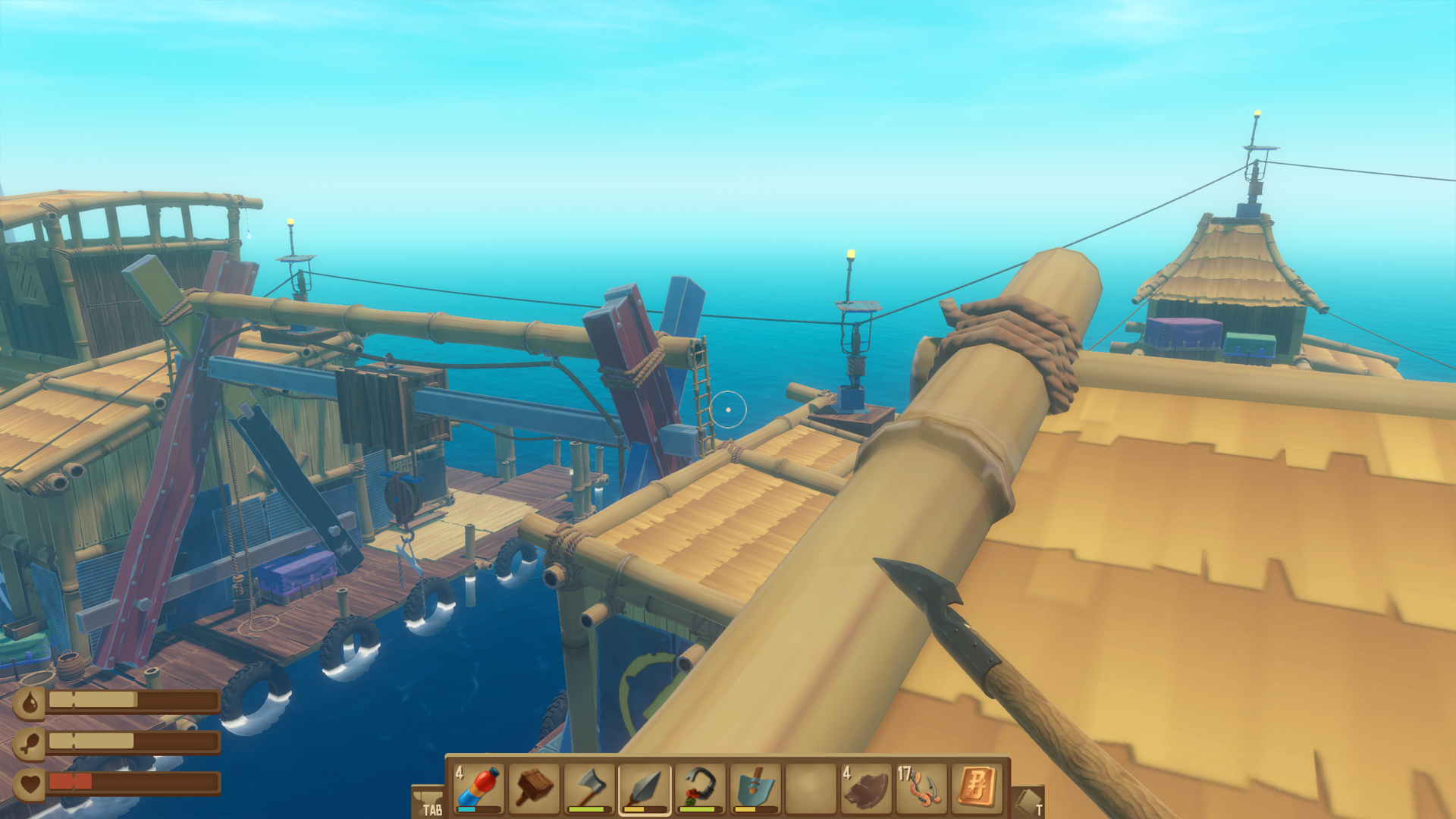 See the pile of Cogwheels on the floor? You can’t jump while carrying them, but you can place them on crates. If you keep doing that (place them as high as possible, then climb up yourself), you can place the wheel on the platform lift on the right side.

To get the platform lift to the second level, you need to use the weights on the left side of the room in the following order:

Bring the Cogwheel with you to the next room, because you have to solve another lift puzzle. Here’s a step-by-step:

Use a Cogwheel to lower the next drawbridge, then carry a new Cogwheel to the transport platform below. Make sure the Cogwheel is transported to the other side, where the broken elevator is, before going through the obstacle course once again. 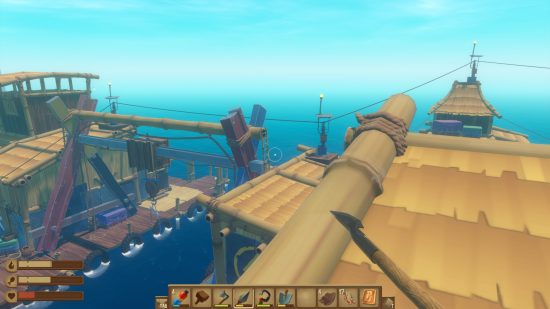 After taking the elevator, use the crates to reach the higher floor. It takes a stack of five crates to get up to where Olof is standing. Be careful though, as he’ll be throwing fire bombs at you. When Olof runs away, go after him, but don’t overlook the Electric Zipline Tool blueprint and Warehouse Key.

Next, drop down and take out the hyenas, then stack crates again to reach the higher floor (the largest stack needs six crates). Make sure you have a good weapon and some Healing Salve, because your next fight is against a much bigger (and deadlier) hyena boss called Alpha. Here are the cliff notes for the fight against Alpha:

Once Alpha’s no more, use the elevator and approach Olof. Jump after him to find the final blueprint: Titanium Tools. Grab the Master Key from Olof and take the elevator down. Once you step outside, you’ll find the building with all the locks on it on your right hand side.

You can probably guess what’s next… Use the Master Key, free Utopia, and enjoy the final cutscene in Raft. Congratulations on beating the game! If you’ve missed any Raft characters during your playthrough, head to our guide to find them.