Our Raft Cooking Guide will tell you how Cooking works and also has Cooking recipes, including Grill recipes, Cooking Pot recipes, and Juicer recipes!

How to Unlock Raft Cooking

You can first unlock Raft Cooking by Researching a Plank, a piece of Scrap, and a Rope. These three ingredients are used to make the Simple Grill.

How to Unlock the Advanced Grill in Raft

You can unlock the Advanced Grill by Researching a Plank, a Metal Ingot, a Rope, and a Nail.

How to Unlock the Electric Grill in Raft

We don’t yet know how to unlock the Electric Grill; presumably, you unlock it by progressing through the story.

How to Unlock the Cooking Pot in Raft

You can unlock the Cooking Pot by Researching a Plank, a bit of Plastic, a Metal Ingot, a Bolt, and a Vine Goo.

How to Unlock the Juicer in Raft

You can unlock the Juicer by Researching a Plank, a Plastic, a Bolt, a Vine Goo, and a Circuit Board. 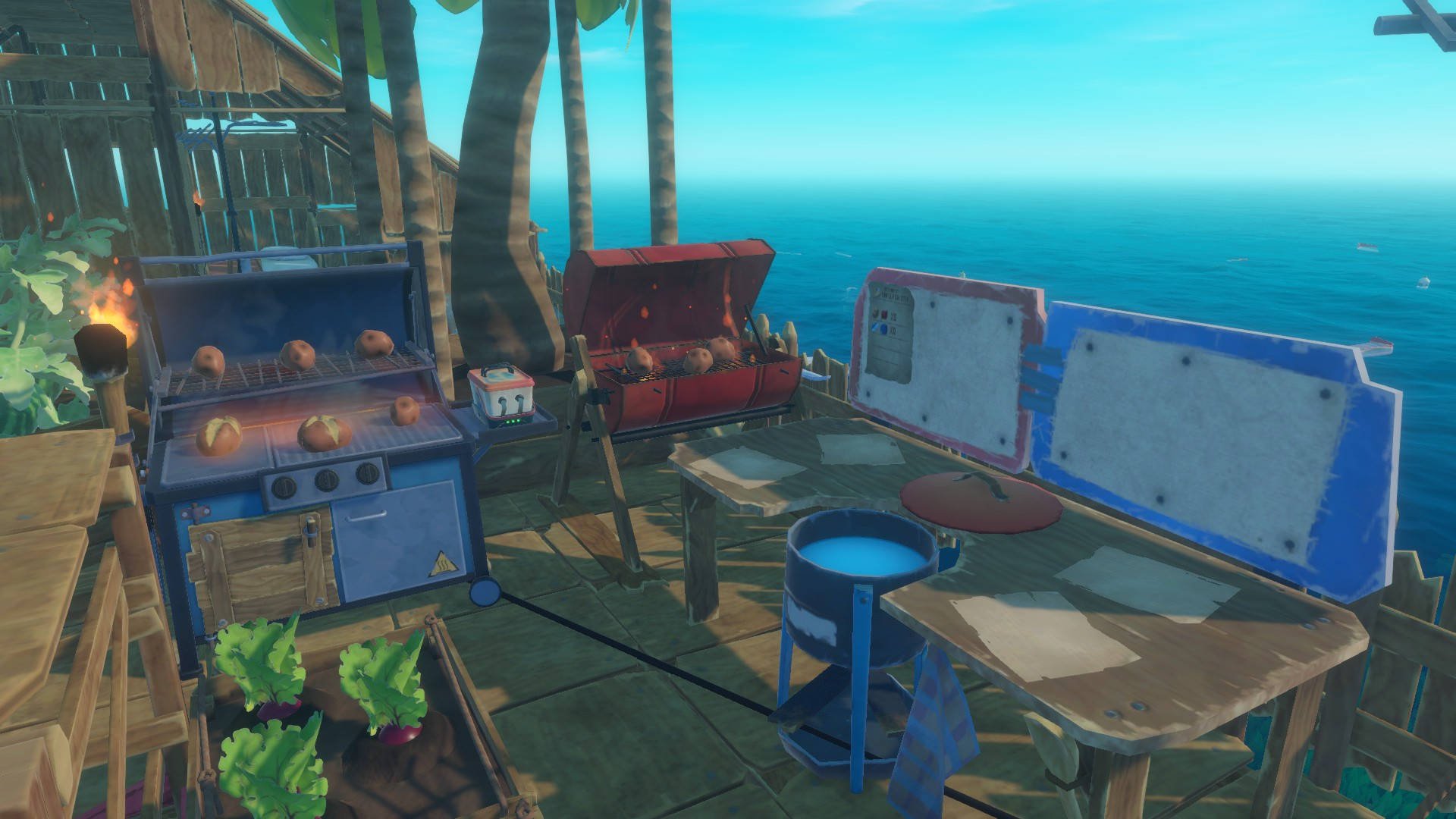 There are three ways to cook in Raft, each of which requires a different Cooking station:

In all three cases, Cooking takes some fuel (either Planks or Battery Power) and some time. Don’t expect your food to be crafted right away!

How to Get Raft Cooking Recipes

You can get Raft Cooking recipes by randomly finding them in Barrels and other kinds of containers.

Recipes don’t just inform you about the ingredients – they also serve as a decoration piece. You can place a Recipe on a wall or on a special surface of some Cooking stations such as the Cooking Pot and Juicer.

Do You Need Recipes to Cook in Raft?

No, you don’t actually need the recipes to cook in Raft. Simply place the correct ingredients on the correct Cooking station and you’ll get the intended final product, whether you have the recipe or not!

The Grill can cook 1 “small” food item at a time by using Planks as fuel. It’s strongly recommended to get Scrap and Metal and upgrade to an Advanced Grill right away so you can cook things more efficiently. Additionally, some items are too big to be cooked on the starter Grill.

Here’s what you can cook on the Grill:

These recipes are so large that they can only be cooked on the Advanced Grill or on the Electric Grill:

Here are all of the Raft Cooking Pot recipes. Don’t forget: you’ll need a Clay Bowl to actually eat any of these, and the Clay Bowl will be destroyed after you consume the food.

Catfish Deluxe gives you a buff that lets you run faster for a few minutes.

Hearty Stew gives you a buff that lasts a few minutes with a powerful ability: it will prevent your death one time as long as the buff is active. If you take a hit that would have killed you, the buff will disappear and you’ll retain about 20-25% of your health. You can’t take a second hit, though, so get moving!

Leftovers are the result of mixing together ingredients that do not correspond to an in-game recipe. They’re not very good.

Salmon Salad includes a buff that temporarily increases your lung capacity for a few minutes.

The Juicer (as the name implies) lets you turn fruit and other items into Juice. Drinking these concoctions requires that you have a Drinking Glass (which is destroyed when you drink the Juice).

Here’s what you can make in the Juicer:

The result of combining 4 ingredients in the Juicer that do not correspond to a recipe.

Gives you a temporary buff that lets you swim faster for a few minutes.

That’s the end of our Raft Cooking Guide, but there’s still a lot more to learn about the game. Why not read some of our other guides below and buff your knowledge of living out at sea?